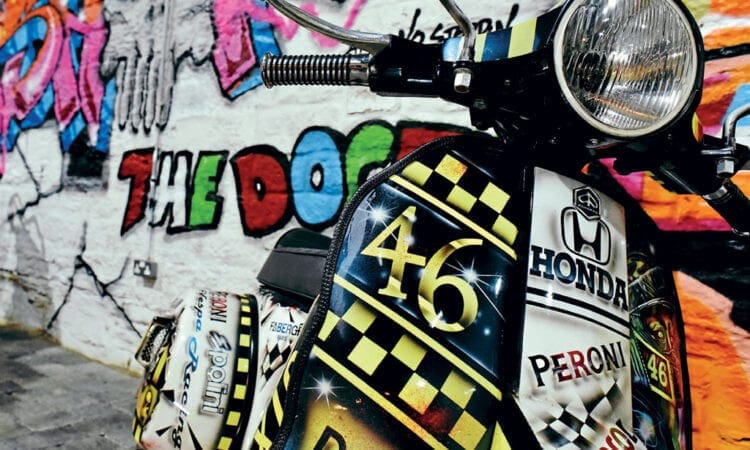 Valentino Rossi’s nickname ‘The Doctor’ has been attributed to his cold and clinical dismantling of opponents, as well as the respect he has earned in racing. Dr Death is Richard Bowman’s Vespa street-racer, which delivers a ‘Toxic Twist’ on the MotoGP champion’s style…

Valentino Rossi started out on go-karts; Richard’s first scooter was a Lammy monkey bike that was used to thrash around on the quarry site near to where he lived.

“I became interested in scooters in the 70s. As a kid I’d sit in my uncle’s shed trying to piece the parts together out of the 10 or so scooters he had in there in various stages of the build process. I didn’t know what half of the parts did or where they should go, I’d just piece them together like a jigsaw!” Richard laughed.

“Later I spent years as a biker watching the likes of Rossi and Foggy battle it out on the track, but I was a scooter boy at heart. I’m not a mod and not a skinhead, just a scooter lover.”

Time for a change

Richard has over 30 years’ experience as a scooterist and throughout his years of scootering he’s owned several scooters, but Dr Death is his first street-racer.

“After years of playing it safe I decided that plodding around at 50mph was no longer what I wanted. I wanted something that would ride like its tyres weren’t touching the ground. I’ve been following Gatch’s Toxic work since the very beginning, I liked the style and I wanted my own Toxic scooter, but I wanted the theme to be combined with my love of MotoGP.

“When I saw Gatch’s Dr Death Valentino Rossi Toxic scooter in the making I immediately knew I had to have it. The off-the-wall interpretation of Rossi was perfect. I know Toxic’s not everyone’s cup of tea, but for me, that’s all part of the appeal; it allows you to push the boundaries and put a different spin on any theme.”

The scooter’s bodywork has been Toxified in a way to add to an illusion of movement. “John Fellows added an air scoop to the engine sidepanel and cut away parts of the panel so you can see all the oil and dirt from the engine. It shows it’s a ridden scooter which has been grafting and it shows the honesty of the machine. There’s no indicators and the outer sections of the legshields have been trimmed back, which suits the Toxic idea of nothing being standard. It’s a street-racer with attitude. It’s got guts, power, performance and the looks that I want.” Richard smiled.

Richard’s had a couple of engine set ups with the scooter since he got it. In the early days its top speed was around 70mph, which was when it was running on a ported molly kit and RS pipe without the current crank.

The engine set up has been upgraded and it now runs on a Pinasco 177 kit supported by a Mazzucchelli race crank. The carb is a PWK flat side item with a Polini manifold and Polini mid-race reeds.

Power is delivered through a standard 150 gearbox, which is managed through a 23 tooth Cosa clutch. A Revolver exhaust takes care of the final element of business.

“It pulls away quick through every gear and wants to rip your arms off! It’s lightweight, very easy to handle and you can throw it round corners without a worry. It’s a true street-racer, which I’ll also be able to rely upon to do long-haul journeys to rallies.

“I’m currently still in the process of running the new set up in, so I’m running it a little richer than normal, but once it’s all complete and dynode I’m expecting to see vast improvements from how it performed previously.”

With Richard having outlined the engineering side of things, I wanted to track back a little bit and ask Gatch about the development of the artwork and the approach he’d taken towards it.

“Everyone does race-replicas and it seems to me that the general interpretation is that the closer someone gets to producing an exact replica of the original racer the better the scooter is, but where’s the personal touch?

“The Toxic interpretation delivers Rossi’s identity and personality. Rossi’s a light-hearted individual who doesn’t take things too seriously and this is proven in his riding style and ability. However, with his style of riding, death could always be a result, so he’d rather take the risk of riding hard and fast rather than playing it safe, which is the whole point, and that’s why we weren’t going to play it safe with a Toxic Rossi race-replica.”

Gatch continued. “It’s my belief that racing is mainly controlled by sponsorship, with TV having a big say. Who knows, but I imagine a sponsor’s patch on a racer’s leathers probably costs around a quarter-of-a-million pounds?

“The impression from what I’ve seen of Rossi, by way of his character and colourful outlook on life, is that he likes to distance himself from the conformist influence. The Toxic theme is all about striking apocalyptic colours and Rossi’s outlook is perfect for the Toxic treatment, which probably comes the closest to aligning itself with Rossi’s personality and delivering the truth of his character.

“Valentino Rossi’s kind of like the MotoGP anti-hero, and with this in mind I wanted the artwork to show that he’s a guy who isn’t scared of risk and isn’t scared of paying the ultimate price. I also wanted to add into the blend an inference that he isn’t scared of challenging the senior powers involved in MotoGP. He won’t let them control his personality, and this is something which fits in directly with the non-conformist attitude of the Toxic theme.”

No room for rules

The style of this Toxic Rossi race-replica clearly delivers an alternative interpretation of the character himself.

“Those who follow the rules are easily replaced; those unique individuals like Valentino Rossi don’t come round very often and I feel it’s a fitting tribute to a man who had the world at his feet at such an early age,” explained Gatch.

Richard added: “I didn’t want a Vespa to pop to the shops on. I wanted a scooter that would be a thrill to ride. Hopefully I’ve got a scooter that Valentino Rossi wouldn’t feel out of place on. I’ve got aspirations to make it to the 100mph club and it’ll hopefully be the top performing scooter of the Toxic series for a long time to come.

“One thing is for sure, I won’t be riding at the rear of the pack any more and I’ll be at rallies two hours before anyone else; that’s if I make it there in one piece because at the moment I’m still running it on the standard drum brakes and to stop it I’ll probably have to drop an anchor out of the back!” he laughed.