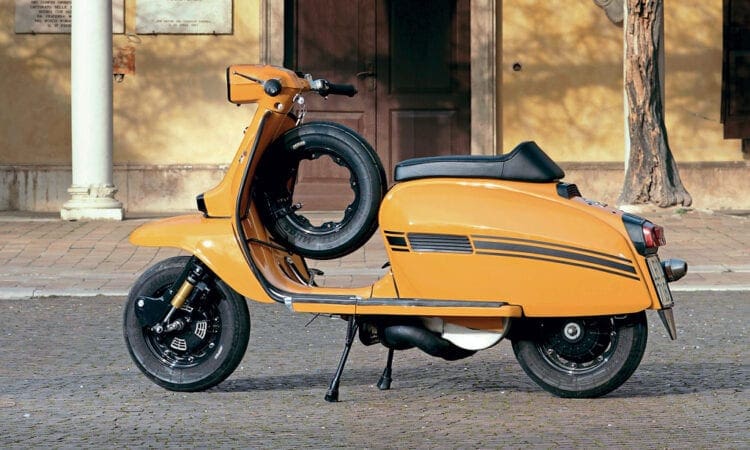 I was deeply lost in the tune of ‘Who Do You Love’ by The Doors, when I saw this orange passion machine near the centre of Portogruaro. This place is a city full of young people, of university age, keen and curious about the world.

Drummer John Densmore was rumbling sticks on the drums while my eye cast across down to the DL’s stunning lines and shape. One of the peculiar things about the Italian tuning community is committing to hide a beast engine inside a relatively standard body. In the UK I think you say ‘street sleeper’. I think this style is popular because people love to smoke any other scooter rider (in particular the modern auto) without exception of its looks.

Imagine (Beatles would say), you are cruising at 50km/h while a group of young lads start to overtaking you with hunger. You wait – otherwise there is no benefit in being an adult – and follow them, increasing your speed. At the most unsuspected turn, and at the least convenient path you – a serious and mature adult – set on the loose all your horse-power, overtaking them all again in one blast of fear and ferocious noise. Is this not real scooter porn? It is to me. This is the image that this machine gave me when I saw her the first time. Potentiality.

Edo, the not-very-young owner, told me he was able to reach 150km/h with no effort at all. There is nothing more emotional than seeing the beauty of happiness in a scooter owner’s eyes. His fierce-looking expression was even more remarkable when we decided to pose his machine in front of the tax officer’s headquarters.

We entered the park as quietly as we could and took a few shoots just in front of the main door. What was the point of this scooter style, I asked? No reply was given. I would think though, that it is all about revenge on the Italian ‘custom world’.

A lot of owners are terribly bothered about being forced by the law to NOT tune anything at all. But, as you can see, some pissed-off ones don’t care. Something is moving, though, in this strange and very regulated Italian law, and hopefully in future we will enjoy our passion without feeling like outlaws.

Despite all this, Edo showed me his diaries about the DL project. Two years of his life were given over to this machine.

“It took me four months just to be focused on the colour. When I look at her now, it is like being hypnotised, I can’t help it.”

A few officers came out of the building in the late morning light that day. Edo approached me and whispered: “You see these people? They love it. Maybe there will be hope in the future.”

I understand Edo’s point perfectly. What is the pleasure of building a machine that you cannot use on the open road? Usual problem. Let’s get back to beauty, though.

As I walked by the scooter, firstly I admired the clean design. I loved the positioning of the third wheel, which is ripped off in a lot of projects. It is a racing-style solution, as the most common rally enthusiasts used to say. I do not entirely agree with this. To me it is more about balance of the scooter’s general overview; a stylish solution to a practical problem, to fill the usual gap you see from a lateral point of view. “You lost the use of the glove box Edo,” I teased.

“I don’t care, the wheel is a compass to me. If I see two of them, it means I had too much beer, so better no glove box than no driving licence.” How can you argue with that reasonable reply?

Densmore was a very passionate Beatles fan. He admitted that the four ‘Brits’ were far more over the top and the best in circulation during his time. Despite the timeless war between Rockers and Mods, I would like to travel back in time and go deep into the research about the favourite music listened to by scooterists, and all that grey area between the two sub-cultural groups. This is something I will explore in the future, for sure.

Edo’s machine reminded me all along of songs from The Doors and The Beatles, as if the two genres would meet together in this DL. As a matter of fact, as soon as I wanted to look closely, the air seemed to be filled by ‘Touch me’ notes. Maybe I should start to think about a good shrink?

A Monza 70×58 engine was hidden under the left and right wings. So, 225cc fed by a VHSB34 Dell’Orto carburettor. I loved the filter housing bumped out to breathe fresh air on the right side. At this distance the ‘standard’-looking silhouette recognised from far away had now diminished. I could see I had a serious street-racer in front of my eyes, and Edo seemed to be very pleased about it.

“Remove the panels Christian, and let the engine shine in the sunlight,” he said. White tank and the ‘heart’ were exposed in their beautiful bi-colour relationship with the main chassis colour. At that point Edo shouted at me, waving his new helmet.

“Red as a touch of chili.” I don’t like too many colours when the machine is straight as this one, but I have to admit that in this case they worked. Black stripes and wheels, along with the accessories, were part of the orange cocktail. The body was immaculate as a matter of fact… as the machine was two weeks old.

We were really enjoying our time, shooting and talking about the usual dilemma (Vespa versus Lambretta), when I realised that police officers were looking at us. We were in a public green park where scooters were forbidden, but instead of being asked to leave, something unexpected happened.

At first they appeared to be unfriendly, but when they got up close, one said: “What a beauty this is.”
They asked about the tuning operations and kindly suggested that we go near the park border to finish the shooting.

“We are not all scooter enthusiasts in this office, you see,” one of them told me. We parked the DL near a stone wall and I took my time to enjoy the view. I asked Edo if he preferred Lambrettas over girls, since he kept the single-person seat.

“No way, my girl has her scooter, too. Maybe one day we will be able to travel with machines with us leaving behind the fear of getting caught by the street police.” What a romantic scenario it was. A couple of passionate scooter enthusiasts vanishing behind a sunset near the sea.

The drive and enthusiasm of Edo for his DL, and his fierce will to create a custom scooter, created a machine that was still true to the original beauty of Innocenti. Despite this machine not being a ‘hard-core’ tuning example, I walked away from it very pleased.

As soon as Edo was out the park I heard the engine revving up. The Traveling Wilburys song, ‘End of the Line’, rang through my ears as I left the city. Suddenly, a ferocious sound approached. A lightning-fast machine overtook me, screaming at astonishly high revs.

I recognised the tail as a 50 Special Vespa. It was special indeed, since the only thing I could see was the teenager’s backpack strapped like a scared monkey over his shoulders. So there is hope in this Peninsula for tuning. I guess he arrived at school on time.