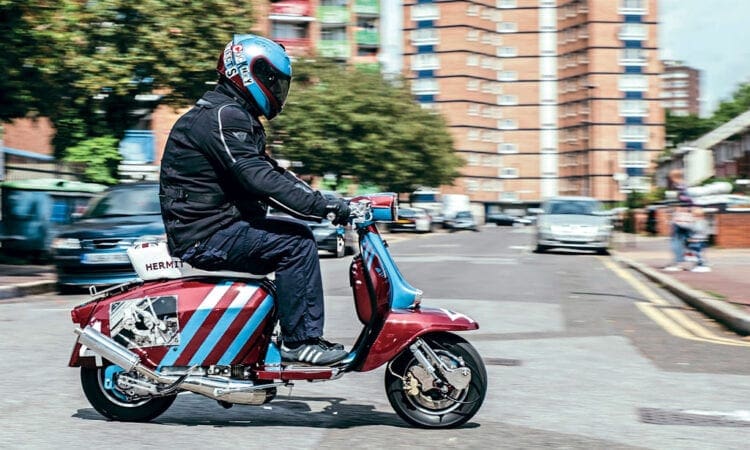 It stands to reason that when a football fan is passionate about his football team and his scooter, then the outcome will be delivered to a high level of precision. Add in a Punk band and the cocktail is set for a fast-paced, wicked blend of intricate detail. Stand by for Mark Rogers’ ‘Bonzo’ West Ham United themed scooter.

As I wasn’t too familiar with West Ham FC, Mark explained that the club was founded in 1895 as the Thames Ironworks and reformed in 1900 as West Ham United. They moved to the Boleyn Road ground in 1904, which remained their home for more than a century until the club re-located to the London Stadium in 2016.

Mark explained that his favourite band is the Cockney Rejects, who formed in the East End of London in 1978 and their 1980 song, ‘Oi, Oi, Oi’, was the inspiration for the name of the Oi! Music genre.

The band members are loyal supporters of West Ham United and pay tribute to the club with their hit cover version of ‘I’m Forever Blowing Bubbles’, a song traditionally sung by West Ham supporters.

Mark initially intended to produce a claret and blue street-racer. He was already in possession of the scooter, but he needed to find a paint specialist-cum-artist who would be up to the task. During his search, Mark came into contact with Rob Dickons of Dred FX.

“I’d seen some of the work Rob had done and he looked like the ideal fella to complete the work I was after. We made contact and Rob came up with some great ideas. After the discussion with Rob, it emerged that there was a lot of possibilities for the project, and having spoken with Rob I realised the potential for the artwork was immense, so we decided to base the theme on my favourite West Ham player, Billy Bonds (a.k.a ‘Bonzo’) and his 1980 to 1983 Adidas number 4 shirt. It was going to be more than just a claret and blue street-racer.”

The paint work took approximately two months to complete and during that period Mark and Rob continued to exchange ideas about how to get the look Mark wanted. Mark drew up some ideas and designs and passed them over to Rob, who developed them.

Once the pencilled design was complete, Mark separated the bike into individual panels, which Rob stripped and prepped. When the initial prep stages were complete, Rob made all the panels and bodywork ready for the primer and base coat. Once Rob was satisfied with the base coat, the scooter was ready for the artwork.

It naturally followed that the artwork needed to have a starting point from where it would deliver the theme. So the theme begins with a mural of the 1895 T.I.F.C. (Thames Ironworks FC) club badge, which crowns the scooter’s head-set top.

Staying with the head-set and focusing in on the detail, the hydraulic disc-brake reservoir displays the quote, ‘Tackle the wall of the gym, nut the door and throw a few f##ks about’, which was a quote from Billy Bonds describing his training technique.

Engraved on the gear selector by Kevin Adams is, ‘Fortunes always hiding’, which is a line from the ‘I’m Forever Blowing Bubbles’ song, and a one-off K2 Customs ‘799’ headlight grill indicates the number of appearances Billy Bonds made for West Ham.

Kevin Adams’ engraving ‘Six foot 2’ appears on the horn cast grill, which represents a song sung by West Ham fans about ‘Bonzo’. The front mudguard has a mural of ‘Bonzo’s’ number 4, which Rob has lightly airbrushed an element of dirt into it to illustrate ‘Bonzo’s’ strong style of play.

As you’re looking round the scooter, you’ll notice that to keep the football shirt element of the theme flowing, the paint work shows a detail of stitching around each body panel. Lightly airbrushed bubbles also appear throughout the body panels and on the inner frame, which deliver a further element of depth and articulate an inner gentle flow of appreciation to the theme of the scooter.

The leg shield toolbox shows the mural, ‘Boleyn Ground 1904 to 2016’, which is shown over wrought iron fencing and is a tribute to the ground, which was West Ham’s home for over a century.

The frame toolbox door has been engraved with Billy Bond’s signature and also carries the quote, ‘Claret and Blue Army’.

The main mural on the offside side panel shows Billy Bonds lifting the 1975 FA Cup, and a ‘portrait’ mural of Bonds himself appears on the nearside side panel.

The Adidas three-stripe branding on the nearside side panel is complimented by a ‘BONZO’ graphic in gold, which would be the name of the model of the Adidas trainer if there were one named after ‘Bonzo’.

The one-off custom seat made by ‘Corky’ is stunning and predominantly delivers the away game shirt colours of West Ham.

During the project Rob also completed a one-off helmet for Mark, which is dedicated to the Cockney Rejects and was signed by the band when Mark met them at one of their rehearsals.

There are further neat Keith Newman additions to the scooter, which include petrol and choke taps, rear rack, kick-start pedal, ‘Hammers’ splash plate and flywheel cover, ‘East London’ – ‘Evil Cockney Laugh’, which is a line from the song, ‘We are the Firm’ by the Cockney Rejects.

The engine runs on a 30mm Dellorto carb, a TSR Evo exhaust with 58/107 gearing and an AF clutch. Mark explained that at present he’s not gone any faster than 77mph on the scooter, but there’s plenty more left in the throttle, although he’s happy with the performance sitting at 65mph.

The BGM front dampers and the gas-assisted rear shocker keep the scooter firmly on the road at high speed, and the front disc-brake provides the majority of the stopping power. The scooter accelerates through the gears nicely and sounds perfect on the road.

Mark’s involvement and collaboration with the specialists in the development of this project has served to make ‘Bonzo’ a unique scooter. If I were to describe the scooter in the style of a football team summary, I’d say its formation is solid at the back and reliable up front.

In terms of rock and roll, it’s sharp, strong and fast-paced. Billy Bonds and Sir Trevor Brooking have both seen the scooter and it’s received their full approval, which is an endorsement at the highest level to Mark’s passion for West Ham FC and his scooter.