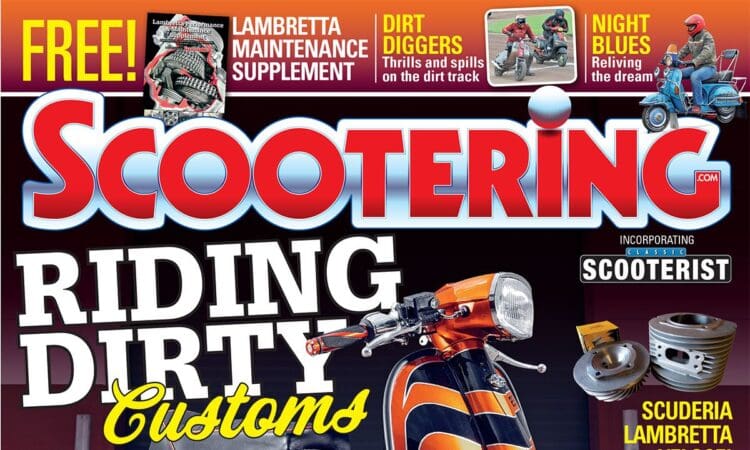 03 Welcome letter from the editor
A warm welcome to the August edition of Scootering.

06 Kickstart
The upfront section with all the latest news, views and product reviews!

14 Feature Scooter: RB230 RDC Special
Martin Holland wanted an eye-catching, vibrant scooter with street-racer aggression. But, most of all, he wanted it to be a Riding Dirty Customs special.

30 Mailbox
Readers’ letters, laughs, feedback and fury – get it off your chest!

32 Show us your scoots!
The best of our readers’ rides as sent in by you.

36 Reader’s Ride: Johnny Love Motorsport 4.0
The art of the Lambretta street racer going from matt black to a full-blown custom is a dream that has come true for one person…

40 Subscriptions
Get your mag delivered to the door, earlier than newsstands, and save money… cool. Plus – gain access to all the benefits of the ‘Scootering Extra’ subs club.

42 Having to prove a point
Stu Owen reflects on how scooter manufacturers were constantly required to show how good their designs were, through enduring feats, just to be accepted within the two-wheeled industry.

48 Dealer Focus: Supersprint Restorations and Fabrications
The name might appear to imply a Vespas-only specialism… however, you couldn’t be further from the truth!

52 Feature Scooter: Cartoon Capers
That-there envious green-eyed monster has a habit of manifesting itself, fuelling both want and desire in the process. This rat-rusto is the result of that desire for one lucky owner.

58 Throttle Therapy: California’s Napa Valley
When the pandemic brought the world to a halt, the virus crippled club gatherings in California as it did the rest of the world. Now that the lid is being peeled back, riding is coming back full throttle.

62 Retro-active
Single marque tuners are a rare breed; fortunately for fans of Scomadi, Retrotech Racing has them covered.

66 Tech Torque: Let’s Split
It’s time for Stan to turn his attention away from our T5’s frame and crack open those casings. Have we got a runner, or will he be stuck with a stylish unicycle?

71 Take Five
The five-port barrel was a resounding success on Vespa’s T5, as well as many subsequent Lambretta kits since. It’s a concept that is not lost on Tim Boardman of Scuderia Veloce, and is being fully exploited on his new kit …

80 Tech Torque: Aftermarket tuning options: Part 7
The crankshaft in your Vespa engine is at the heart of power transmission. Stu Owen takes a look at some of the current offerings in the marketplace.

86 BSSO Three Sisters
The BSSO returns to Three Sisters for an (almost) scooters-only great day of racing in the sunshine.

I’m on the road again…

It’s not every day you get asked to be editor of the world’s number one scooter magazine, so imagine my delight when I was asked to be just that, way back in 2016. Unsurprisingly, I’ve remained delighted ever since, it’s a great job! So why the hell am I leaving? Well, I keep asking myself that question every day at the moment… but I guess that’s just nerves. The truth is, I’ve been approached to take on the role as ‘editor in chief’ elsewhere, outside of the scooter scene, and so I’m making that leap of faith. I’ve often had the conversation with people in the publishing industry, and most agree that 5-6 years in one role is enough before you start to stagnate. So, at just short of six years (by the time I complete my three months’ notice), now is a good time to move on to my next challenge. It keeps things fresh for me, and it keeps the magazine improving for you. Fear not though, you have me at the helm for a couple more editions, during which time we will be announcing my lucky successor… whoever he (or she?) may be!

Departure notice aside, that leaves me with the other burning question… what the hell am I to do with the Spanish T5 I’ve just bought? I already have enough on my plate with my Lambretta, I literally only bought the Vespa to utilise it as an ongoing tech-project in the mag… but now that’s not happening, I can see it just sitting in my garage, as I immerse myself into my new role elsewhere.

If you read last month’s column, you’ll know that I had turned to my old buddy Scott Durnion, who regularly imports quantities of Spanish scooters into the UK, and he had just sourced me a stunning Spanish T5 model. Once MoT’d, I had planned to use registration-maestro Gary Seale, at Supertune, to carry out the V5 paperwork task for me, as he does a complete registration service at very reasonable prices. But given my sudden, and somewhat unexpected, change of circumstance, I’ll now be popping the machine up for sale. Of all the unfinished projects I have under my belt, and let me tell you there are quite a few, this will be the shortest lived… say hello, wave goodbye! I usually at least strip them into bits before my (very) short attention span is diverted elsewhere, but this one is still fully functional. Ahh well, such is life.

Anyway, that’s enough of my ramblings, it’s another belter this month… stay safe and enjoy the issue!