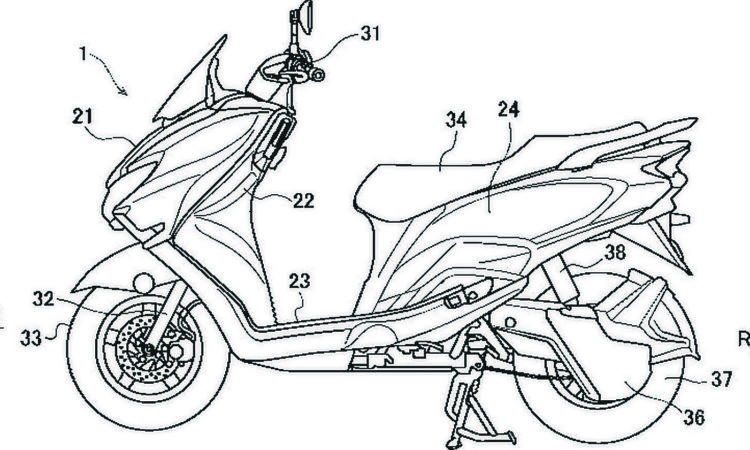 It feels like we’ve been talking about the future of the Suzuki Burgman for years, but a fresh set of patent documents suggests that we might see an electric version in the not-too-distant future.

Recently released patent documents suggest that Suzuki could be preparing to reveal a battery-powered version of its much-loved Burgman scooter.

Suzuki’s been a bit slow to enter the electric arena. In recent years it appears to have focused its attention on hydrogen power, creating an alternative-fuelled Burgman scooter that’s been trialled by the Met Police in London.

But we’ve heard nothing much since, and so with the increasing popularity of battery-powered bikes and scooters, it’s unsurprising that the Japanese manufacturer is starting to put some plans in place for electrification.

And now we’ve got our hands on some leaked design drawings which have emerged online, which appear to show an electric version of Suzuki’s commuter-friendly Burgman scooter.

Sadly, the documents give nothing much away, so for now we’re just going to have to keep our ears to the ground in anticipation of the next piece of news and more specific information.

That said, it’s very likely that we will be seeing an electric machine from the factory sooner rather than later, particularly following the firm’s recent announcement that it was withdrawing from MotoGP, during which it also made a statement citing one of the main reasons was to free up some cash for the ongoing development of electric technology.

It’s got some catching up to do, with Honda having recently launched its electric PCX, Yamaha recently revealing its NEO-S, and a host of other Asian companies (including SuperSoco and NIU) cleaning up in the electric commuter market.