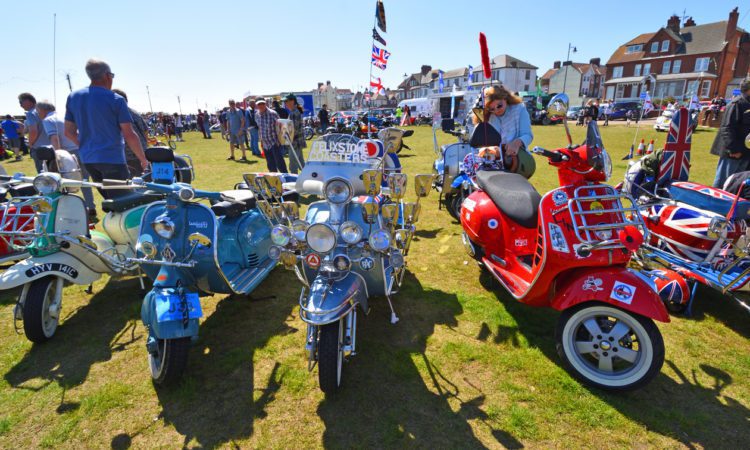 With a second-hand scooter just bought, I thought: “Okay, let’s try a rally.” Just like back in the 1980s. What could possibly go wrong?

Me old pal ‘Wints’, a fella who joined the Burton Brewers when the rest of us started to concentrate on other things, was an obvious link back to it all. He’d invited me to join him at a Burton Brewers rally, he was helping out so we got there early and pitched our tent.

Saturday was great, but the camping… not so much. Falling over guy-ropes trying to get back after a night of beer, chat and music, before giving up and crawling the last few yards, where had all of the other tents come from? Partial dismantling of the random tent thoughtlessly erected across the entrance to our tent was required in order to get in. Not getting to sleep until all of the people shouting at other people to be quiet had finished, and then being woken by those who believe in the mantra ‘the morning is the best part of the day’. Then, finally, feeling like death warmed up and putting on damp clothes; camping rallies are not for me.

Moving forward, and now with Lambretta GP bought, I limited my rally experiences to local ones where I could ride back home at night, but it is not the same. Skegness is my favourite rally, always has been, always will be. The main attraction these days, I think, is that it is based in the town centre so you can be part of it all without having to spend the night in a tent!

Don’t hate me for this, but one year I even travelled in a car with my wife, Ang, along with Marie and Wayne Deacon but, eventually, I bit the bullet and decided to go on my scooter, meeting Ang, Marie and Wayne there later. I spoke to SK Scooters’ Alan Downs and he suggested I travel with him and his mates from the Shepshed Scooter Scene who were travelling with the Leicester Alliance Scooter Club (LASC) – motto: no subs, just pubs. “The best part of the rally,” he said “is riding in a big group into the Ship on Friday afternoon.” Something I hadn’t/couldn’t experience going in the car.

Alan and his pal collected me from home, then we went on to pick up Coalville Kev and Mo, and so on around the houses until we were a fair-sized group. I could see this was going to be a long day. The ride-in was typical 80s, lots of stops for fags, the toilet, petrol, coffee or even beer. And, typical 80s, the group broke up. We lost Alan at a petrol stop when he realised that we were short of a couple of Lambrettas and went back to help, and then the heavens opened up.

The final breakdown occurred a couple of miles out of Skegness – Vespa Mick went over to the stricken bike, while the rest of us removed our kit and the smokers made the most of the fag-break opportunity. I stood to the back chatting to a couple of lads when we saw Vespa Mick put his kit back on and set off. No one seemed sure what was going off so we hesitantly set off in dribs and drabs.

And that’s why I arrived in Skegness on my own, riding into the Ship as a lone rider didn’t quite fulfil my prior aspirations, so I went straight to my B&B, made my scooter safe and removed my wet clothes.

Once Ang, Marie and Wayne arrived it was back to a typical Skegness scooter rally for us. Friday evening started with us sticking to the floor while we tried to dance in Wellies (the pub, not the boots) before moving on to Meanie BoBini’s (I love these Skeggy pub names) to see a 2 Tone tribute band.

Saturday was spent walking around looking at the scooters. We visited the custom show in The Castle, the official rally venue, and popped into Wolfies, for old times’ sake. We bumped into Alan and his family in The Steamboat, from the outside we would have looked like three middle-aged families out for a day at the seaside, nothing to do with the excitement of the rally outside.

On Saturday night we had a crawl around all the pubs that had scooter-related entertainment on but they were all too full to be enjoyable so we ended up in ‘Spoons, where the LASC had set up camp and were making a party of it.

Come Sunday morning and Ang and I went to wave the main body of the LASC riders off. I was surprised at the number of wives and girlfriends doing the same, we were not the only couple to arrive in different modes of transport. Sunday we spent in and around The Castle, it is always a lot quieter on Sunday. We watched Johnny Boy; Marie and Wayne like him for reasons I can’t fathom, before having a grown-up meal in a restaurant.

Monday was a solitary ride home… I had planned to travel back with Alan but he had scooter problems and was ferried home in his van. It was a much quicker ride and I spent part of the way with a couple of lads on autos who were also making their way home from the rally. Despite the ‘group arrival’ being a damp squib, and various other problems along the way, a scooter is definitely the only way to travel to a rally.