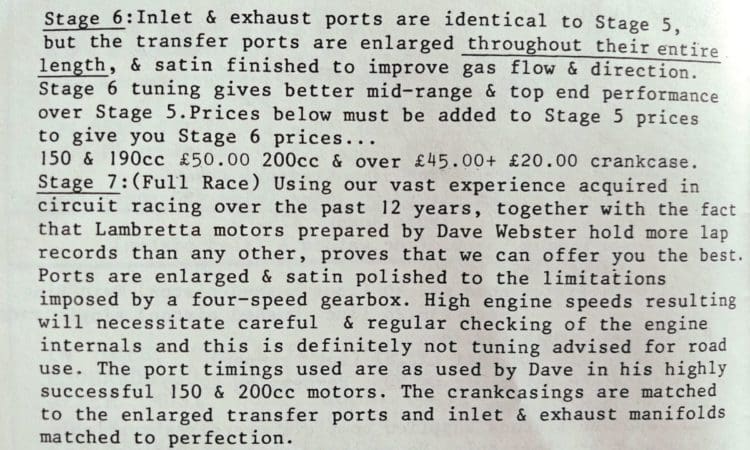 There aren’t too many addresses that, on their own, will make scooterists smile but this is one of them.

It doesn’t read like much of an address, and it isn’t much of a building when you get there either.  But in the mid 1980s if you were of a certain age and into tuning scooters you probably knew 13 Station Road, Long Eaton, Nottingham, NG10 2DF off by heart. In the same way as you probably knew another address in Newport. There aren’t too many addresses that, on their own, will make scooterists smile but this is one of them.

At the Long Eaton address you’d find a poky little terraced house that had been converted into a shop. I say shop – there was a counter. Behind that counter you’d find Messrs Webster and Kerr, Dave and Norrie, who together were Midland Scooter Centre, better known as MSC.

At the time I’d had scooters for a couple of years and when a friend dragged me to watch scooter racing my fascination with making scooters go faster was created.   Dave and Norrie were two of the track heroes of the day and very much at the forefront of racing and tuning, both pushing boundaries. The Newport address was occupied by arch-rivals Taffspeed, and there was a certain friction between the two camps. Indeed there was often a little tension between Dave and Norrie, but like many families the fighting was part of the closeness.

I remember going over to that poky terrace, riding 30 miles at tea time on a dark, wet winter’s evening to collect my new Autisa barrel that I was assured was going to be there for me. They were the latest, greatest, thing but long overdue.

I was to be disappointed upon arrival, they still hadn’t arrived. By now I was a regular customer, I’d switched allegiance from the legendary Roy Wharton’s in Hyson Green as my passion was now adding speed, not chrome. I remember Dave’s apologetic face when I arrived, having made the totally wasted journey.

To cut a (very) long story short, Dave said that he’d tune me a barrel rather than wait even longer for the Autisa one to arrive. I was to go back the following weekend to pick up the Stage 6 barrel, and I remember eagerly counting down the days until Saturday finally arrived. I also had to take over my stripped crankcasing so he could do the porting on it. My dad was unhappy at me taking apart my perfectly functioning engine in order to tune it and make it unreliable. With hindsight he may have had a point!

I was not to be disappointed. The barrel was everything I expected, after all it was ‘almost’ a race tune.

This memory was triggered when I looked through an old typed and photocopied MSC price list I’d found hidden in a photo album. Back in those days the Stage 5 was a whole £45. Taking it to Stage 6 was the same again, plus another £20 to port the crankcase. It seemed a lot of money back then but would be a bargain today.

I switched from a 30mm Dell’Orto to the full-on 34mm Amal to suit the Stage 6, and looking at this price list that would have cost me £62. Although a few years later I was introduced to a guy who apparently know someone who worked at the Amal factory in the West Midlands. Given a bit of time he could ‘acquire’ Amal carbs at a bargain price. Apparently he spirited them out piece by piece around his person. Allegedly.

According to the list, if you wanted MSC to supply a glass fibre GP mudguard it would cost the slightly odd price of £12.71. There was obviously some logic as to why the 71p was necessary, but I don’t know what it was. If you wanted a quality Borgo piston you’d have to part with £19.75, apparently rounding that to the .75 was more logical than the mudguard!

Filtrate Super two-stroke oil was available for a whole £2.10 (if only it was that price now). But on my Stage 6, I let Dave talk me into running it on BelRay MCI. This was chuffing expensive but I never seized on it. Dave told me with a serious look to only ever use BelRay and never, ever, mix any other oil with it or I’d destroy my engine. As he was the world-renowned expert I took that advice seriously and never did mix it. This led to a very nervous ride back from Morecambe, eking out the fuel as I was down to the very last dregs of BelRay in my toolbox.

MSC was only at that converted terrace house a short time before moving to larger premises in nearby Sandiacre. The business is still going strong now, with a clear heritage and family line that leads straight back to those early days with Norrie and Webbo behind that counter!

It feels like a very long time ago, but then again it is! Unfortunately we lost Dave a few years ago but Norrie is still going strong, running VEUK and riding Vespas around the Midlands.

I’m sure many of the readers of this magazine will have graced one of the MSC counters at some point, but if 13 Station Road rings a bell you are definitely of a certain age!