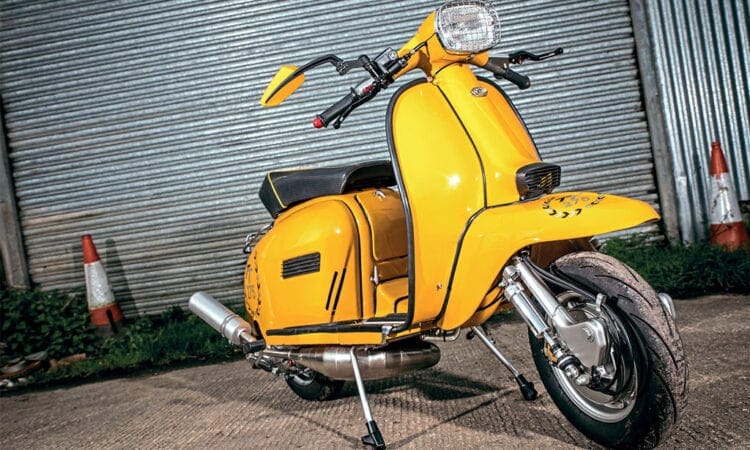 A street sleeper, in scooter terms, appears nondescript, yet under the panels it a torque twisting power unit that packs a proper punch. This scooter certainly does that!

Way back in the 70s, when he was both young and impressionable, Tim Lake had his head turned by one particular scooter. This was a yellow ochre Lambretta GP200 electronic, at the time owned and ridden by a then local to him fellow scooterist.

Around 40 years down the line, with an accrued wealth of experience on two small wheels, Tim had owned and ridden a number of scooters. Until recently not one of them had been anything like the Bertone-designed last of the Innocenti-made Lambrettas, the GP Electronic, which had been etched indelibly in his mind.

During the 70s the crème de la crème of Italian Lambretta scooters was the GP200 Electronic. The last and final production Grand Prix model manufactured in Milan. Within the past couple of years, Tim finally got himself a yellow ochre GP Lambretta which encompasses recent(ish) innovations, developments and upgrades in key areas to the dream scooter of his youth.

Make a decision, do it now

Tim had initially planned to build his dream machine to coincide with his retirement from working for London Underground.

“After seeing and hearing a Targa Twin at the Isle of Wight a few years ago, I was convinced that this was the engine I was going to have. At that time Targa Twin engines were 250cc; by the time I got to the point of putting an order in, the 275cc was available, so that’s what I ordered.” The intention was to use some of his retirement money to fund the scooter project.

However, two contributory factors came into play that led to both the work commencing earlier than was originally planned. “I had quite a serious health scare, that thankfully I overcame following an operation. Coming out the right side of that coincided loosely with a successful PPI claim.

“A good mate of mine, Mick Gauntlett, convinced me to buy the engine I’d decided on, a Targa Twin, sooner rather than later. His exact words were “If you can afford it… get it, you can’t take it with you!”

While the Targa Twin doesn’t by any means deliver an amazing top speed that leaves everything else trailing in its wake, comparably it provides a superior acceleration as well as overall power spread and output to that of a TS1.

In its basic format, a Targa Twin gives somewhere between 22 and 25bhp, with a top speed of over a genuine 80mph. At the time of writing Tim hasn’t notched up too many miles on the clock. That said, it was very recently that it was sent for its MOT.

Albeit based on this limited viewpoint, how has Tim found the engine performance so far? “It runs very smoothly. You could stand a pint of beer of her on tick over and not spill a drop. It’s quite torquey when accelerating. It lifts the front wheel in a low power wheelie.

“I’m looking forward to putting some miles on the clock, which will start properly by riding up to the Kelso rally. As long as I keep to not exceeding 65mph, as recommended all should be good, and I won’t piss off any of my mates by slowing them up too much. It runs sweet and fast.”

Yellow ochre livery and subtle, understated murals consisting of a laurel wreath around the letters TT and the cubic capacity in numbers adorning both side panels – it all hints to those in the know.

The power unit that resides within was commissioned from Extreme Paintwork and Fabrication. Of course, the work was carried out to comply with Tim’s exact specifications. “I’ve always liked standardish looking scooters, and I’ve had a liking for yellow ochre on a GP Lambretta. That dates back to the 70s.

“A fellow scooterist round my way at the time had a GP200 Electronic, in yellow ochre. Most of the Electronic GP200s that around then were in that colour. I’d been pestering him to sell it to me for a while and he eventually agreed, I scraped the money together in anticipation of doing the deal at the coming weekend. Trouble was, disaster struck before the deal took place.

“The owner came off that particular GP and wrapped it around a lamp-post, which sadly was the end of both the deal and that particular scooter too! It took me some 40 years, but I got the scooter I wanted, as I wanted it now, in the end.”

Over the past few years cold calling chancers have been calling, emailing and snail mailing just about anyone, everyone and their dog asking the question ‘have you been mis-sold a PPI?’ Television advertisements featuring an Arnold Schwarzenegger look-alike dummy head on a mini tank track – a cross between his Terminator character and his character in Total Recall – are constantly reminding us that any outstanding PPI claims need to be processed before August 29, 2019.

Of course, if it doesn’t apply, all the cold contacting along with the adverts are more than an annoyance. The reason behind both the cold calling and adverts are that many people were mis-sold PPI back in the 80s and 90s. Something that was flagged up by, among others, consumer champion campaigner Martin Lewis via his Money Saving Expert website.

Tim investigated whether he was eligible for compensation for being mis-sold PPI, and discovered that he was indeed eligible for a pay-out. With Targa Twin 275 engines retailing at 8500 euros, and Tim’s successful claim resulted in the funding for an earlier than planned purchase, in keeping with his less-is more outlook, his GP became The PPI Project. PPI claims terminate here.

The GP Lambretta which, over a 24 month period, transformed into the PPI Project was already owned by Tim. Indeed it had been under his tenure for some considerable time – longer than he can recall.

Two years or thereabouts is not an unreasonable amount of time spent building a scooter, especially one built to last. The vast majority of the work was carried out at Surrey Scooter Services by Mick Gauntlett and Tim. Due to necessity, the build was fitted around work on other, customers scoots.

During the creation of The PPI Project, Tim has, since retiring from London Transport, ended up working with Mick at Surrey Scooter Services. In addition to both the paint job and Targa Twin engine, there are a few other modifications to Tim’s scooter aimed at improving the handling, braking and also to suit Tim’s riding style.

“Slightly dropped handlebars on the headset is probably the most obvious change visually. There’s also an inboard hydraulic disc brake as well as adjustable shocks front and rear.

“It handles like a dream and runs smoothly with plenty of torque. I have a feeling that once it’s run in it’s going to be fast enough for my needs. Standardish looking, The PPI Project is a street sleeper scooter.

“Although there’s nothing planned as yet, once I’ve run it in and clocked up some miles, it is likely there will be a few more tweaks and modifications to my Targa Twin GP. I’m looking forward firstly to riding it, Kelso here I come!”