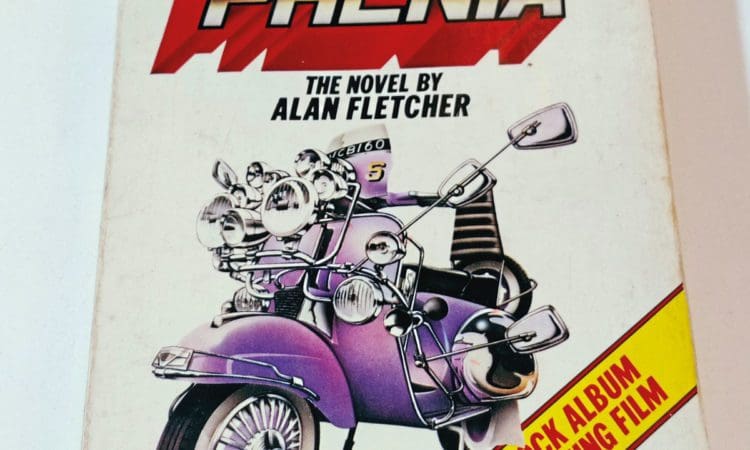 I recently came across a late night re-showing of the Quadrophenia film, which I haven’t watched for quite a few years. Watching it again took me back to being a 16-year-old wannabe Mod…

Sometimes I’m transported back to a very specific place by music and film. Watching the opening sequence I was in Nottingham (having gone on the train) wearing an Oxfam jacket and some two-tone trousers.

We went to watch Quadrophenia on a Sunday afternoon and I spent ages outside looking at the scooters, wishing I was one of the cool kids actually old enough to ride one! I remember looking at a metallic brown Lambretta with chrome side panels.  I’d never seen such a cool-looking thing in the flesh before and I wanted one. My future was set that afternoon.

Looking back on Quadrophenia, I have to say it was bloody awesome. Often films about subcultures can be pretty awful, in fact generally they are! Very few films can pull off a feeling of authenticity. The only other one that comes close is the Lords of Dogtown film about the Z-Boys skateboarding scene.

So what makes Quadrophenia so good?  There was certainly a high quality cast.  The only weak link was Sting who didn’t really cut it for me. The rest of the cast have mostly gone on to enjoy long acting careers, showing how well the casting team did. Of course the music was brilliant and the original Quadrophenia album remains one of my favourite albums ever. The Rock, Love Reign O’er Me, I’m On, 5:15… just brilliant tracks.

One of the reasons the film has survived the test of time is that the storyline is actually quite deep. Jimmy is clearly struggling with many aspects of life looking for excitement. Wanting to ‘be someone’. His story of misplaced friendships and wanting to be with Steph leads him to highs and lows. Finding himself in court with the Ace Face gives him someone to look up to, after being spurned by Steph. But he is to find that the Ace Face was just a bell boy in reality. Jimmy is like many young men, an angry and somewhat mixed-up young adult trying to find an identity and purpose. In a funny way the story mirrors aspects of modern social media in that the celebrities people idolise and aspire to be are very different in real life.

This week I watched a few YouTube videos about the film and learnt a few things I didn’t know, such as the first time Sting pulls up on the GS there’s a walking stick on the rear rack. Sting was crap at riding scooters and had sprained his ankle trying to learn. Apparently he’d been hobbling around with the stick and the production team forgot to remove it from where it had been temporarily put! It’s also quite amusing trying to spot the errors here and there and of course recognise friends who are still in the scooter scene. A few YouTube searches will also reveal an incredible number of replica ‘Jimmy’ scooters!

The portrayal of most of the historic scenes was actually generally pretty good despite the odd GP Lambretta appearing.  Of course it has spawned a whole Mod scene and industry which, overall, is far less authentic in relation to the true Mod culture. I have always thought there is a unique irony in promoting individuality by dressing and acting like everyone else in their scene. I just don’t get it.

The book of the film was written by Alan Fletcher, who lives close to me, and some of the stories included in the film were based on his 1960s scootering life around Nottingham, Grantham and Skegness.

Perhaps the scene I most relate to is the opening titles with Jimmy weaving down the road around Shepherds Bush to the soundtrack of The Real Me. He’s lost in the simple pleasure of riding a scooter dressed smartly and looking cool. We can all identify with that feeling.

Does Quadrophenia stand the test of time? I think it actually does. The music and fashions are timeless, but so is the underlying story of teenage angst, first love and finding an identity.

I’ll definitely watch it (yet) again in the future.