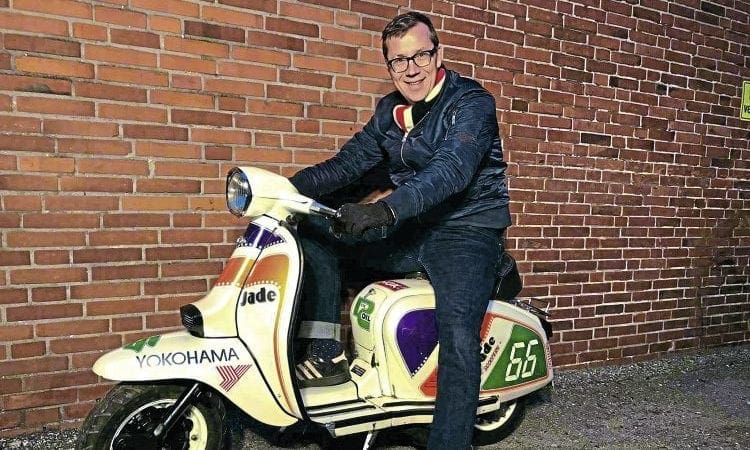 Finding these hidden rare gems gets harder and harder each month, but they are such an important part of our scootering history, so we never stop trying. This month’s nostalgic gem has been unearthed in Germany, and goes by the name of JADE 66.

Dealer specials are nothing new, dealers have been branding and ‘pepping up’ the models they sell for decades. Right from when scooters were first imported into the UK, the dealers liked to ‘stamp’ their brand, logo or aftermarket parts on them to try and keep ahead of the competition… and perhaps even make their machines a bit more desirable. Initially a rack, or some racing stripes and a spotlight or two… before things progressed into the arena of ‘pepped up’ cylinder tunes, or even conversion kits. This type of ‘own brand’ tuning and advertising continued through the decades and by the 80s and 90s machines not only came with a special gearbox or seat but a full shop advert spray job, many of which styles became synonymous with certain brands or dealers. In fact certain colours or stripes on a scooter, could identify particular shops’ and dealers’ work from the other side of the car park!

While some of the dealers reached legendary status, or huge commercial success, others went relatively quiet after a while. As with anything, these peculiarities can go full circle, and often become VERY desirable again in the future… and that has in fact happened with many of the now defunct dealer specials of yesteryear. One of the perhaps lesser known, or certainly less talked about dealer specials, is that which came from the stable of JADE scooters. Many of these were built, but not so many have survived the test of time… and even fewer in original condition!

The JA in JADE scooters is the main man JAson Frost, now operating as Absolutely Scooters, and the DE being his former business partner at that time. JADE scooters produced several ‘race paint’ specials around that time and this month we have been lucky enough to track one down in Germany. Although in bits when found, it’s now a scooter that, after a LOT of work by the latest owner, has been brought back from the brink and looks every part as good today, as it did when it was first done!
Dave O

When you got the scooter what condition was it in and how did you come to get hold of it: It was in very poor condition! Last January a long-time friend (now out of the scooter scene) called me to let me know that he still had a Lambretta hidden away for over a decade! He asked me if I was interested in buying it. So I asked him what kind of scooter it was, and he simply replied – a race paint Lambretta in parts. This gave me no real clue as to what it was. A few days later I arrived in his shed (where he used to repair and spray damaged cars). When I entered the place it took some time to identify what he had and then I realised that it was a ‘JADE’ Lambretta. I was blown away. It was of course covered with many years of paint dust, and cobwebs… and the parts were lying in different corners of the shed. The engine was dismantled and the handlebars were missing. So I put all parts very carefully in my car (even the parts that seemed ruined) and drove home with the happy feeling that I had just taken ownership of something very special!

What have you had done to it or plan to do since owning: I have done a complete scooter rebuild, plus of course much polishing. The engine was fully rebuilt and brought up to date, and I had to give it new forks and a disc brake. The first step for me was to rough clean the frame, to build it together with all available parts and to get German TUV (MOT). After the registration process I put it in parts again and cleaned and polished it. The handlebar cover needed to be painted in the same colour and style. When I was thinking about the engine I had the former set up in mind, but I replaced the engine and instead of using a 66 Barrel with Suzuki Piston on a small block I decided to use a SIL 200 engine with 66mm crank and Worb5 RB250 tuned cylinder, which will result a bit more than 266ccm. But… just in case this engine set up will not work the way I want, I might go back to 66mm cylinders like Imola or Mugello. Either way, my intention is to ride this scooter (not hide) as it was hidden too long.

Do you still do rallies: Yes.
Funny stories: My first scooter run was Scooterist Fun Weekend 1986. I showed up as a Mod and returned as a scooterboy, not particularly funny but a complete life/outlook change that has stayed with me for over 30 years!
Favourite event ever: Lübeck International Scooter Rally 1992-2000; people including Live Acts such as Laurel Aitken, etc.
Favourite Custom Scooter Ever: Sign of the Snake and Hanoi Rock.
Favourite Dealer: Scooter Center Cologne and MB Developments.
Anything else you’d like to add or think is relevant: I got to know that one of my (former club) pals stillowns the JADE 216, which is the Lambretta whichlooks very similar but was equipped with TS1 engine.I am happy to have and be part of this sub-culture!